At long last, the best Black Friday graphics card deals are here to tear down the price of GPUs and make upgrading your gaming PC far more affordable. This is the first time in two years of chip shortages and sky-high prices that we’ve seen costs plummet to something that’s not only manageable, but fair. Don’t wait around for stocks to dwindle or the discounts to run out, give your system a new lease of life by popping in new parts from Nvidia or AMD.

Since the Nvidia RTX 4080, 4090, and AMD Radeon RX 7900 XT and XTX are all less than two months old, you won’t see the very best graphics cards come down in price until next year. That said, there are plenty of deals across the RTX 3000 and AMD Radeon 6000 series, which are more than capable of playing the latest games at a great resolution and frame rate.

If you find these savings leave you with enough in your bank account to upgrade other parts of your gaming PC setup, we recommend checking out the best Black Friday deals in 2022. There’s something for everyone, from keyboards to mice and microphones to a Samsung 980 Pro NVME SSD that’s $200 cheaper.

The Nvidia GeForce RTX 3070 Ti often sits in the shadow of the RTX 3080 considering the latter boasts an impressive MSRP. That said, $150 USD off certainly balances the scales by adding so much value it’s hard to pass up. It now has the taste of a high-end graphics card with a mid-level price.

As the Ti moniker indicates, performance sits between the RTX 3070 and 3080 and is equivalent to Nvidia’s previous generation flagship: the RTX 2080 Ti. It takes aim at 4K gaming on high settings, and even boasts impressive ray tracing capabilities with the helping hand of Nvidia DLSS.

With its Black Friday cost, this is perhaps the cheapest GPU you can buy for 4K gaming. 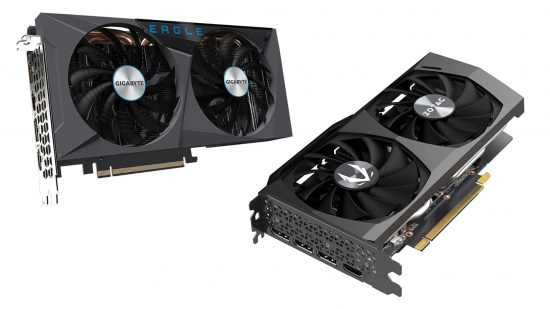 Currently, the most popular graphics card on Steam is the Nvidia GeForce GTX 1060, and minimum specs are rapidly demanding more – just see the Silent Hill 2 system requirements for the reboot. You might want to bite the bullet for an upgrade, as this latest discount makes the RTX 3060 even kinder on your wallet, it’s two generations newer, and supports DLSS.

Overall, its performance is similar to the RTX 2070, and the 12GB of VRAM means it suffers less issues with demanding games than even the 8GB RTX 3070 trips up on sometimes. This is for the 1080p gamer that wants to crank up the frame rate, or perhaps push 1440p with the help of Nvidia DLSS.

And that’s all the graphics card deals Black Friday currently has to offer, but more may crop up throughout the weekend. If you don’t fancy waiting around for your order to deliver, you can speed up the process by starting a free Amazon Prime trial for next-day delivery.

What you see above is really only the cream of the crop. Here are a few other Black Friday gaming headset deals we’ve been able to turn up:

Black Friday 2022 took place on November 25, but there are still plenty of deals to be had over the weekend and come Cyber Monday on November 28. Rest assured, we’re already checking round the clock.

How to find the best Black Friday deals

You don’t need to find the best Black Friday deals, because we’ll do it for you. On this page, we’ll be highlighting particularly exciting headset deals, then at our Black Friday deals hub, you’ll find a long list of other pages, where we’ll be listing the best deals from a range of other types of gaming hardware (like gaming keyboards, or monitors).

Industrial metals have ripped higher since November on bets that China’s reopening will boost demand for raw materials.A group...
Sport

Genshin Impact 3.5 brings its own version of Pac-Man in new event leak