On-chain data shows the trading interest of whales in Bitcoin is now at its lowest point in around two years.

According to data from on-chain analytics firm Santiment, the transactions being done on the network by whales have slowed down recently. The relevant indicator here is the “whale transaction count,” which measures the total number of Bitcoin transfers taking place on the chain on any given day, that are valued at $1 million or more.

When the value of this indicator is high, it means there are a large number of massive movements happening in the market right now, suggesting that whales are actively trading. On the other hand, low values suggest these humongous holders aren’t making many moves at the moment.

Now, here is a chart that shows the trend in the Bitcoin whale transaction count over the last five years or so:

As the above graph displays, the Bitcoin whale transaction count has trended down as the bear market has become longer. The indicator has now reached quite low levels relative to the average for 2021 and 2022, and in fact, the current values are the lowest since December 2020.

This means that whales are showing little interest in trading BTC at the moment. While this means that these investors aren’t adding any significant selling pressure right now, it also implies that they have not been accumulating much either. This is the reason why the cryptocurrency’s price has been stuck in endless consolidation lately.

Santiment points out that a strong correlation between the whale transaction count and the Bitcoin value has historically existed, as is visible in the chart. Bull runs have generally seen very high activity from this cohort, while bears have seen a slowdown like the one being observed currently.

Interestingly, periods of bearish trends have generally reversed when the whale transaction count has spiked up at points when the price has been going down. Such activity suggests interest is back from this cohort to trade the crypto, and the resulting accumulation takes the price up.

There have been some spikes in the metric recently as well, but they have generally coincided with uplifts in the price. Thus, they were likely because of distribution (and not accumulation). Now it remains to be seen when the whales return to trading the coin in full force and cause a bullish reversal in the price.

At the time of writing, Bitcoin’s price floats around $16,600, down 1% in the last week. Over the past month, the crypto has gained 1% in value.

The below chart shows the trend in the price of the coin over the last five days. 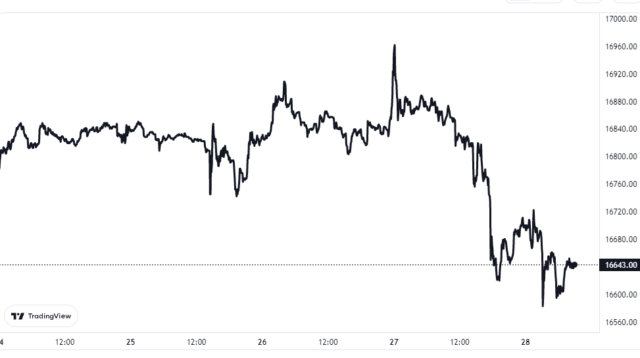 Mt Pelerin, a Swiss-based cryptocurrency exchange, has announced new support for the Bitcoin’s Lightning Network on their app.The press...
Economic

Which Cohorts Are Selling, And Which Are Buying?

Which Cohorts Are Selling, And Which Are Buying?