If NordVPN seems familiar, it’s probably because you’ve been bombarded with adverts for a bunch of different VPNs on your journey across the internet. It can be difficult to see which ones stand out from the crowd with an overwhelming amount to choose from, but our NordVPN review will give you a quick rundown of the provider’s major features, how it works, how fast it is, and whether it’s worth the cost.

The best VPN services are anything but free. There are a lot that claim to hide your tracks while you browse the internet without costing a penny, but beware. Some of these providers are legit, such as the best free VPNs, but the vast majority make money by recording your internet traffic and selling it to third parties. This isn’t a fair trade for your data, and could potentially lead to identity theft if hackers run these services. NordVPN isn’t one of these scams as you get what you pay for, including the same encryption technology trusted by banks, governments, and militaries to keep your browsing habits from ending up in the hands of the bad guys.

One of its most important features is the ability to switch between VPN locations. While you’re connected from a different country, all internet services will treat you as though you live in that country. Want to watch the American Netflix titles you enjoy at home while you’re on a vacation in Europe? This isn’t a problem with NordVPN. You’re able to switch location on the fly from the app and with over 55+ server locations to choose from, there’s a huge selection of titles to watch on Netflix and other geo-locked content providers. We tried out Netflix in Canada, the UK, America, Japan, and Australia, all with total success. Even when streaming HD content, the service keeps up with no noticeable slowdown or lag compared to our domestic connection.

NordVPN is also P2P friendly, for all the gamers and file-sharers who need to be able to connect directly to other peers to run their software. It doesn’t support P2P on every server like some other providers, but it clearly indicates which ones are in the app. Although connecting to distant locations may increase your in-game ping, we had no problems connecting in online games. Likewise, the torrenting software we tested ran without issue.

It’s not just convenient and quick, it’s also highly secure. Journalists and political dissidents trust NordVPN to keep their data private and anonymous when sending information that has life-threatening consequences. This is thanks to Obfuscated Servers feature, which disguises your VPN traffic as normal browsing data to help pass undetected when being inspected by malicious third parties or repressive governments. The provider also uses the globally trusted OpenVPN suite to power its encrypted sessions, as well as its own internally designed NordLynx protocol. Both protocols are designed from the ground up with bulletproof network security for when you really need it.

Security and privacy are clearly top priorities here. Beyond the world-class encryption used on the app, there’s also a no-logging policy that means none of your browsing data is ever kept on the company’s servers. You don’t have to trust NordVPN at its word on this one – it’s hired an external auditing company, PricewaterhouseCooper, to verify all its claims. PwC conducted a full inspection of the way the servers are run and concluded that the service really doesn’t hold any logs on user data. As one of the world’s top auditing firms, PwC’s seal of approval holds a lot of weight. 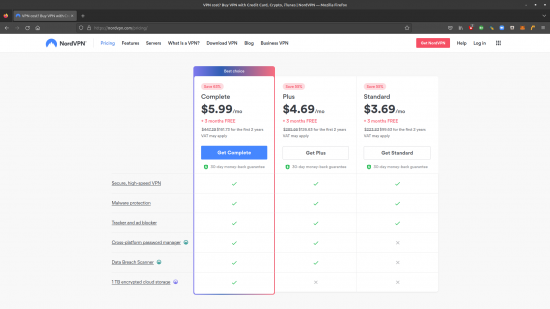 There are a few different pricing plans for NordVPN depending on whether you just need the core VPN experience or you’re looking for additional cloud backup services. The ‘Standard’ subscription includes a secure, high-speed VPN app, as well as malware, tracker, and ad protection! This subscription starts at $11.99 USD per month. The ‘Plus’ subscription gives you access to a cross-platform password manager, which synchronises all your passwords in a single encrypted vault that you can access from any of the provider’s apps. At only $12.99 USD per month the password manager on its own already justifies the extra dollar a month, but that’s not all!

When you buy the Plus subscription, you’re also covered by a ‘Data Breach Scanner’. This tool uses dark-web scanning to alert you to any new database leaks that contain your information. Having your credentials posted online is a huge security threat, but this feature keeps you in the loop so you can change your passwords before you fall victim to identity fraud.

‘Complete’ is the most expensive plan at $14.29 per month, but it’s worth it for the 1TB of encrypted cloud storage in addition to all the features of Plus and Standard. There’s also a 30-day money-back guarantee, so you can try before you buy to make sure NordVPN is right for you. All subscriptions are available monthly, or in one or two year plans that can save you between 45% and 65% on your purchase. For example, subscribing to Complete on the two year plan works out at only $5.99 a month, bringing the cost of the whole package down from $447.39 to only $161.73.

You can pay in several different, from AmazonPay, to Google Pay, ACH bank transfer through Plaid, Bitcoin and Ethereum through CoinGate, as well as all major credit and debit cards. It’s particularly good to see NordVPN offer cryptocurrency payments, as this can help preserve anonymity. 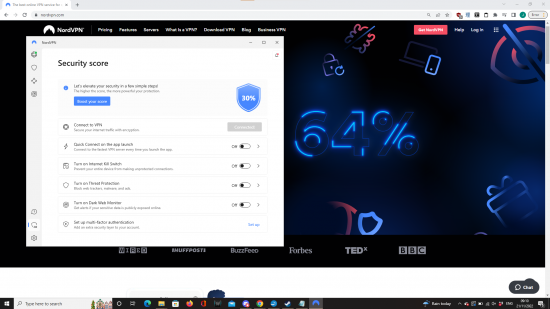 When you use a VPN, you’re trusting your highly sensitive browsing data to a third party. It’s important to be confident it’s in good hands! Thankfully, NordVPN boasts some rock-solid security credentials.

The app itself uses highly secure AES-256-GCM encryption to keep your browsing data unreadable between your computer and the server you’re communicating with. Even if someone was recording all your traffic as soon as it left your device, the encrypted tunnel prevents it from being readable. To keep any information from leaking over an unencrypted connection, this service uses a system-wide kill-switch to shut off all network access when you’re not connected to a VPN. This way, if you lose connection to its servers you aren’t suddenly sending your private data over an unencrypted connection. Combine this with private DNS servers, which prevents your internet lookup queries from being sent to a third party, and you’ve got a VPN app that makes your browsing experience completely private. 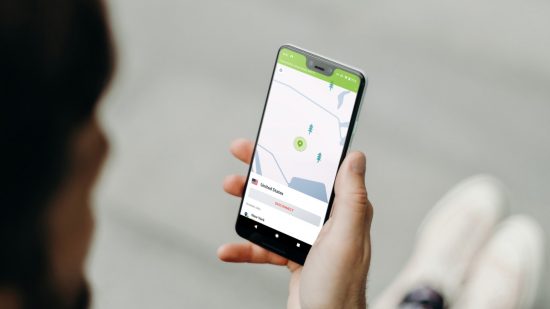 NordVPN is one of the faster providers we’ve tested, which is important for enjoying the geo-unblocking streaming services it offers. After all, it’s no good paying for a fast home connection if your internet speeds are held back by a slow VPN.

We found that the NordLynx protocol gave us connection speeds of up to 750-800Mbps from our cloud-based testing setup. These are blazing-fast results, easily comparable with the fastest VPN, if not the quickest. Of course, speeds vary every day depending on how many people are using the servers you are, but while your mileage may vary, NordVPN is regularly up there.

We also found that jumping between server locations while streaming on a home connection is nearly seamless, consistently receiving HD streaming video from YouTube and Twitch with only a few seconds to reconnect per attempt. 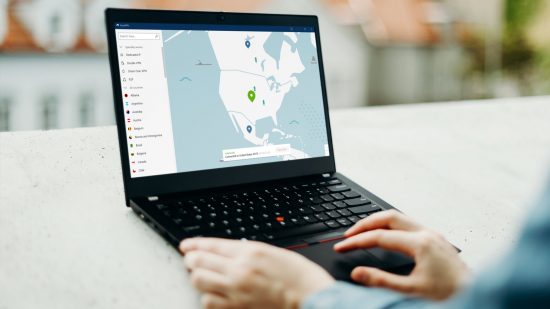 NordVPN works on a whole bunch of different platforms including Windows, Mac OSX, iOS, Linux, and compatible routers. There’s even a browser add-on for Firefox and Chrome, in case you need quick access while browsing. Installing the app is a breeze no matter what platform you’re on thanks to a very comprehensive set of install guides available from the company’s support centre. Once you’ve downloaded and installed the service, it’s as simple as entering your username and password to get started. Most platforms come with a fully featured graphical user interface which presents all the options on a very sleek and minimalist map-based dashboard, so you can see the physical location of the servers you’re connecting to. One notable exception to this is the Linux client, which unfortunately only comes as a command line interface.

Ultimately, NordVPN is a provider we’re happy to recommend thanks to a combination of fast speeds, a huge feature set, constantly growing global server pools and a really competitive price.

It maintains its position as one of the best value for money VPNs on the market, with top speeds, security, and features.

The enlargement of the passport-free Schengen Area has been put under serious question ahead of a key vote in...
World

2 Reasons The Giants Will Most Likely Miss The Playoffs

Diablo 4 classes are series favourites, but new ones may follow

IXION – City building in the stars