The Steam Deck 2 should be modular

The mighty Steam Deck has changed the gaming PC landscape, but despite its success it also feels like a missed opportunity. Don’t get me wrong, I love the portable powerhouse, and I’ve got no real qualms with its overall design. Yet being able to transform the handheld’s hardware inside and out on a whim would be a true game changer, and Valve could dominate this market indefinitely by making its next handheld modular.

The idea of a modular Steam Deck 2 might sound absurd, but the concept is far from new. While the best gaming laptop candidates today aren’t particularly serviceable, iconic machines like the IBM Thinkpad once featured a car bonnet approach with component blocks stowed away inside. No screws, no messing around with fragile innards, just a simple swap that’s akin to playing with Lego.

It’s worth noting that modularity didn’t die with IBM’s innovative ’90s tech, as the likes of Framework’s 13-inch notebooks help to keep the dream alive. However, handheld gaming PCs are a different beast, and I’d love to see Valve take things a step further by creating a Steam Deck that’s unapologetically modular.

If you’re both a tinkerer and a Steam Deck owner, chances are you’ve already cracked the handheld. As you’d probably expect, its innards are a compact sandwich of carefully placed parts, and Valve says you should think twice before poking around inside. This is good advice, as one wrong slip may send it to the big gaming desk in the sky, but it almost feels like the company wants to let you mess around inside the Deck, but can’t.

Making the next Steam Deck’s insides more approachable would help it feel like a conventional rig, but it wouldn’t eliminate associated risks. Rather than catering to just savvy enthusiasts, opting for hot-swappable parts could entice novice players to get involved and facilitate customisation tenfold. Valve doesn’t even have to reinvent the wheel to do this, as plenty of products already dabble with the idea of modularity. 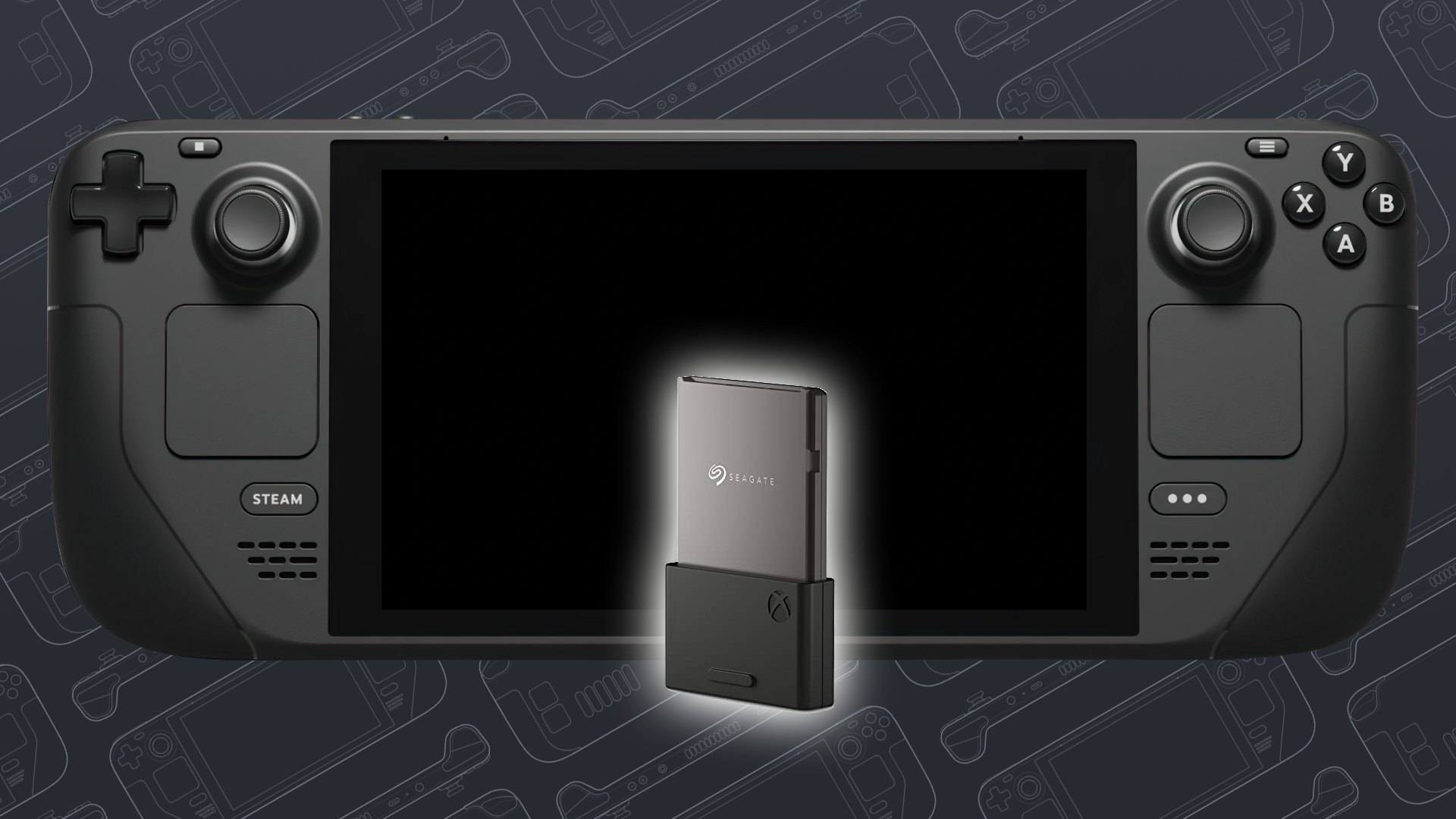 Replacing the Steam Deck’s storage with the best SSD for gaming isn’t diabolically difficult, but I get why some users may be hesitant to try. Again, Valve advises against playing around with the handheld’s parts, and you’ll need to manually take off the existing drive’s shield to protect the Deck (yuck). So, to eliminate that nonsense, I reckon Valve should take a leaf out of Microsoft’s book and use something like the Xbox Storage Expansion Card.

Now, I know what you’re thinking, and I agree that Microsoft’s Xbox drives are unreasonably priced. Yet, if Valve comes up with something that costs less, it’d provide the handheld with an expandable storage method that’d replace the best Steam Deck SD card options, especially if it implements an external case slot.

Alternatively, the Steam Deck 2 could directly follow in the footsteps of Framework and opt for generously spaced internal modules. For this to work, you’d probably still need to perform a less intimidating technical autopsy, but at least you’ll be greeted with crystal-clear labeling, simple connectors, and a less cramped environment to work with. 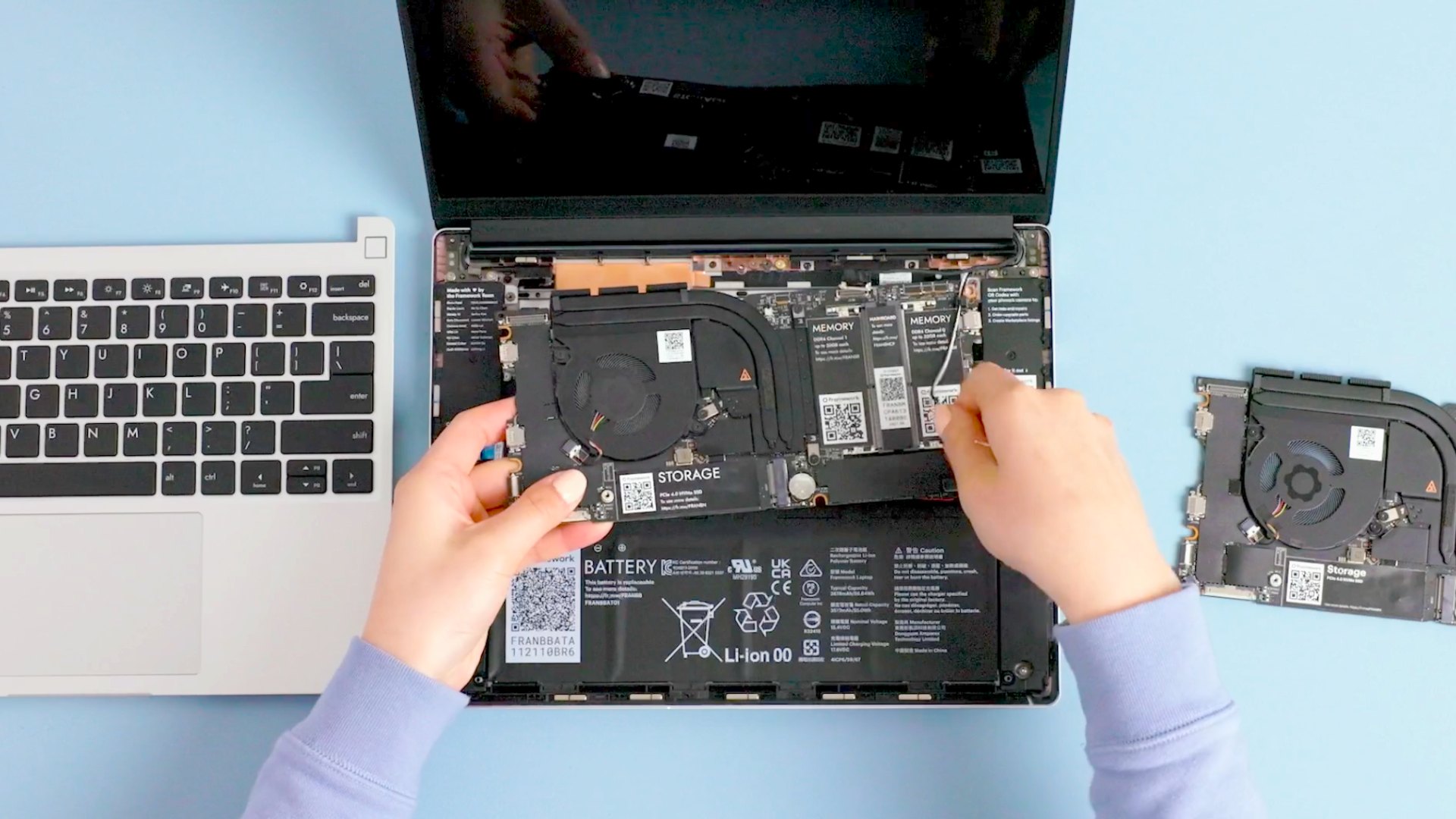 Like it or not, the Steam Deck’s battery won’t last forever, and it’ll run out of steam at some point. You can technically replace it, but iFixit rates the job as ‘difficult’ (it’s easy to see why when you consider the steps involved). Sadly, this fact will likely send many Decks to an early grave, with some users forking out for a new handheld rather than risking repair.

I’m no Valve engineer, but I’d love to see a removable Steam Deck battery that pays homage to Sony’s PSP. To swap out the bats on that retro bad boy, all you have to do is remove a singular screw and lift it out. Not only would this make replacing dead cells a breeze, but it’d let players easily add a higher capacity unit, which may appeal to anyone who constantly runs out of juice.

In a way, the Steam Deck’s low specs are part of the appeal, but they’re still a factor that’ll hamper the handheld’s longevity. Trying to boost fps on the portable’s AMD APU will only get harder as time goes by, and releasing a successor with a better chip perpetuates the cycle.

With that in mind, what if you could just stick new guts in your handheld, rather than buying an entirely new device? In theory, it’d eliminate the need for a Steam Deck 3 and enable Valve to consistently keep up with competitors like Onexplayer and Ayaneo. That said, I’d still prefer to see a full system module, rather than separate APU and RAM components, as it’d save players having to match up appropriate specs. 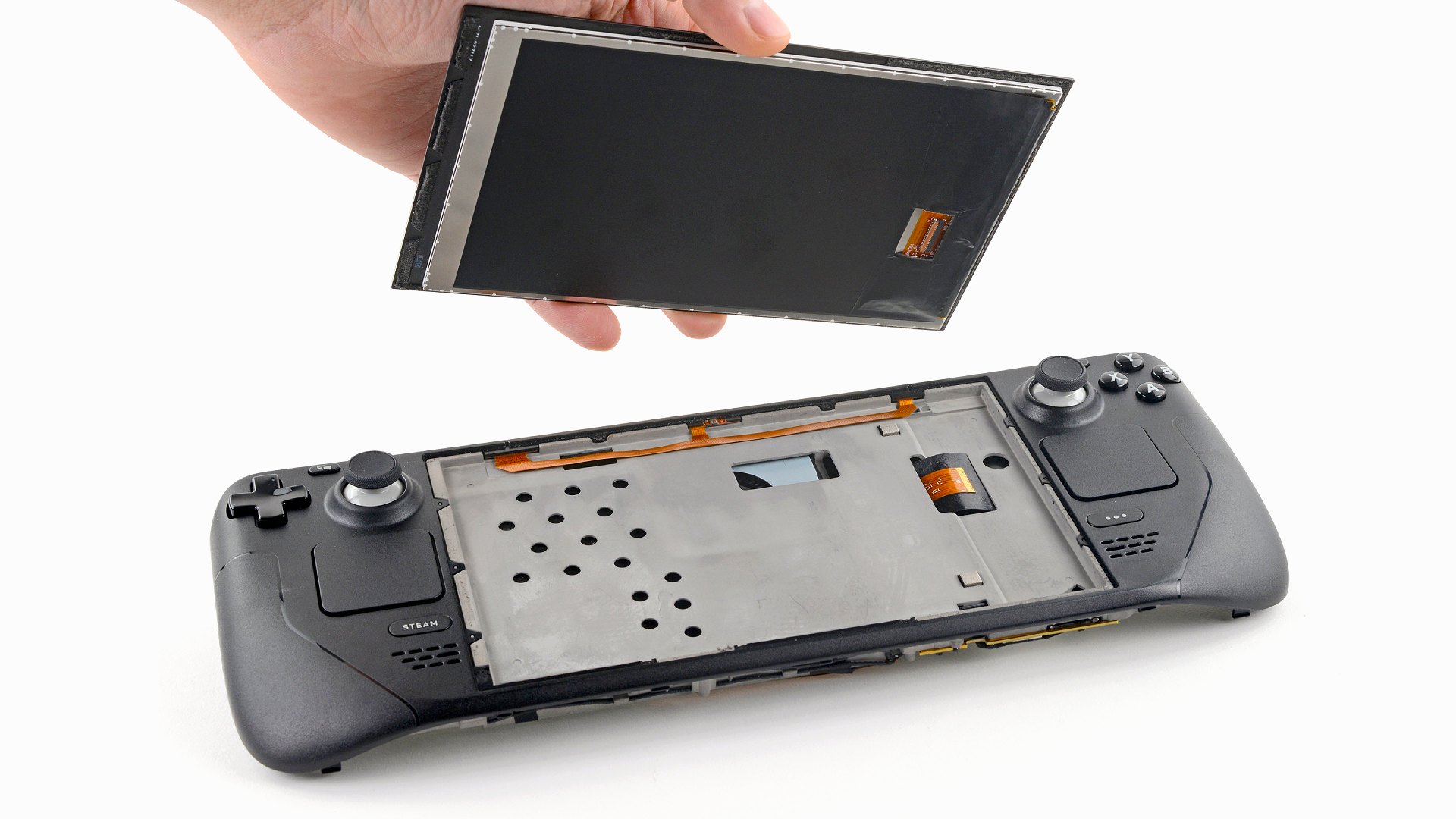 Wish the Steam Deck had an OLED screen? Well, not everyone shares that opinion, as it’d likely drive up the portable’s price. Once again, the solution to this particular conundrum is to make the display modular, as it’d add an element of visual versatility that’s usually locked into place.

I’m not saying that Valve should necessarily sell multiple screens without purpose, as even the next Deck probably won’t be able to drive a 4K screen. Instead, I’d love to see the option to actually stick with a lower-resolution screen and potentially slash the price of the Steam Deck 2.

It’s hard to suggest this with a straight face as there isn’t really a precedent for it, but a Steam Deck without a screen at all might even make sense. After all, pairing the portable with the best Steam Deck dock converts it into a cheap desktop rig, so you could just ditch its built-in screen altogether and use a module to blank out the gap. Sounds ridiculous? Maybe, but the idea may appeal to thrifty gamers on a budget.

Of course, modular screens are a huge boon for repairability, and they’d ease the blow of any unfortunate mishaps. Sure, paying for a new screen will likely still upset your wallet, but at least you won’t have to send it away to a repair shop. 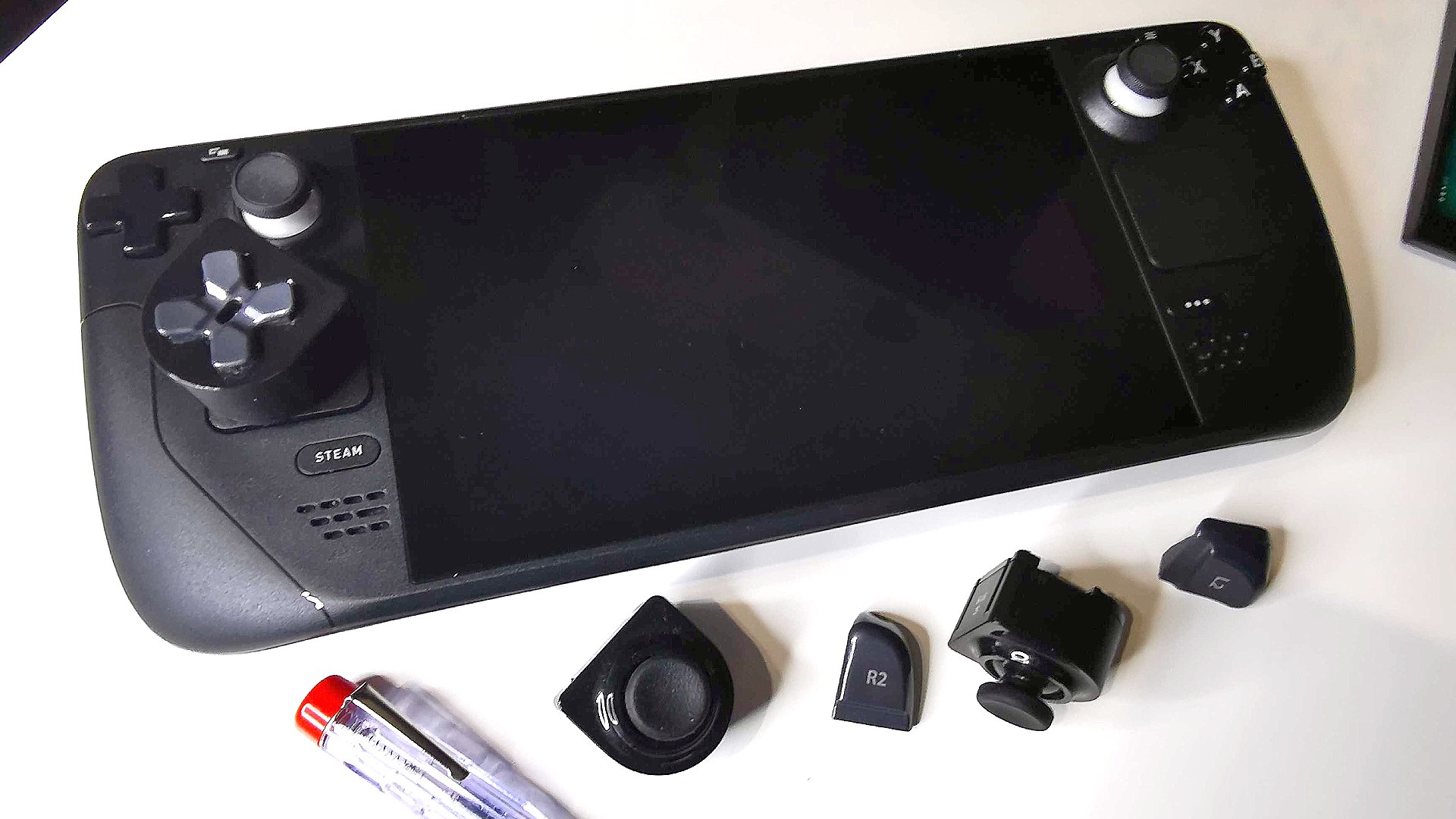 Weirdly, the prospect of modular Steam Deck sticks and buttons excites me more than everything mentioned above, not to mention it’s probably the most practical thing to implement. Changing the Deck’s layout might sound like a basic change, but as someone that’s easily put off by the feel of a handheld, it matters above all else.

If your current setup includes the best PC controller, you’re perhaps familiar with modular gamepads already. Accessories like the Thrustmaster Eswap Pro boast magnetic button modules, sticks, and trigger grips, and you can even switch the placement of each.

By adopting similar tech, the Steam Deck 2 could entice more handheld lovers to the fold, especially those that aren’t into the original’s symmetrical stick layout. It’d also provide you with an opportunity to replace Valve’s touchpads with something else entirely. If it was up to me, I’d release a Playdate-inspired crank, but this is why I’m not Gabe Newell.

Ultimately, a modular Steam Deck 2 would help enhance the handheld’s versatility and longevity. Yet, it’d also contribute to the same fight as Framework, as modern design is continually eroding consumer right to repair. By empowering users with access to modular parts, Valve could solidify its dominance within the handheld gaming PC space, which in turn will benefit both players and the platform’s future.

From queues to visa waivers, here’s how Brexit has changed travel for Brits

This LOL Verifier confirms you really did laugh out loud